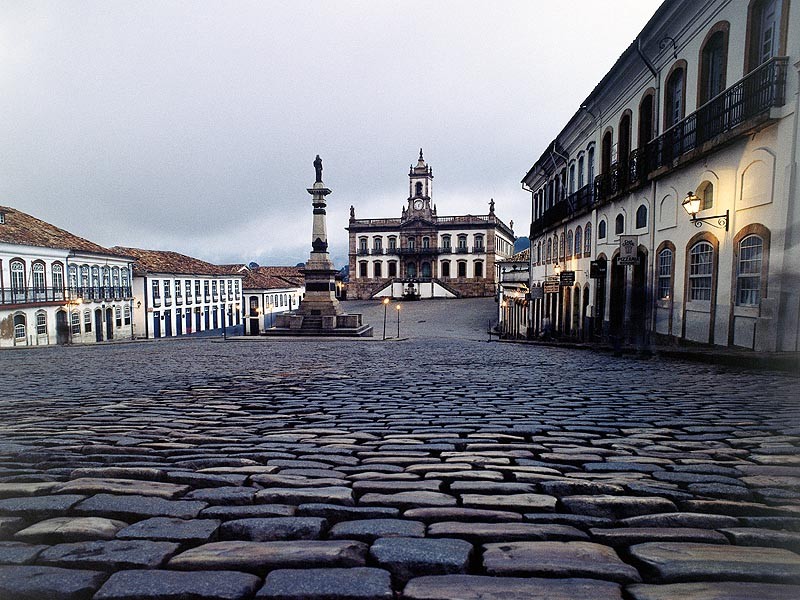 Born from explorer Antônio Dias’s discovery of “ouro preto” (black gold) in the Tripuí riverbed in the 17th century, the history of the city could be conflated with Brazil’s. Ouro Preto enjoyed its gilded age during the Ciclo do Ouro , when it was the stage for the Inconfidência Mineira, a separatist movement led by Tiradentes and motivated by the Portuguese crown’s high taxation of gold.

The wealth of the region, which produced majestic churches, was also the matter for intrigue and the target of many criminal schemes—like the bandits led by Vira-saia who sometimes assaulted cattle dealers carrying gold en route to Portugal. In an attempt to prevent these attacks, they opened the Estrada Real, or Royal Road, connecting Ouro Preto to the cities of Paraty and Rio de Janeiro.

Constructed on the backs of black slaves laboring in the mines, the city still has strong traces of African culture—despite having being marginalized for years— evident in Capoeira, Congados, and religious syncretism. Chico Rei is considered a hero of the black resistance in Ouro Preto, since, after buying his freedom, he became the owner of his own gold mine, known as the Mina do Chico Rei.

The decline of Ouro Preto’s mines, at the end of the 18th Century, led much of the population to abandon the city. This migration, on the other hand, led to the preservation of its historical center, the largest example of Baroque architecture in the world, and a World Heritage sight since 1980. Especially noteworthy are the works of Aleijadinho and Master Ataíde.

Inspiration for poets and artists, for mysterious legends and stories that have persisted generation after generation among its inhabitants, Ouro Preto is an icon survived in Tomás Antônio Gonzaga’s poetry, in Guignard’s canvases and in the imagination of all who have the chance to visit.