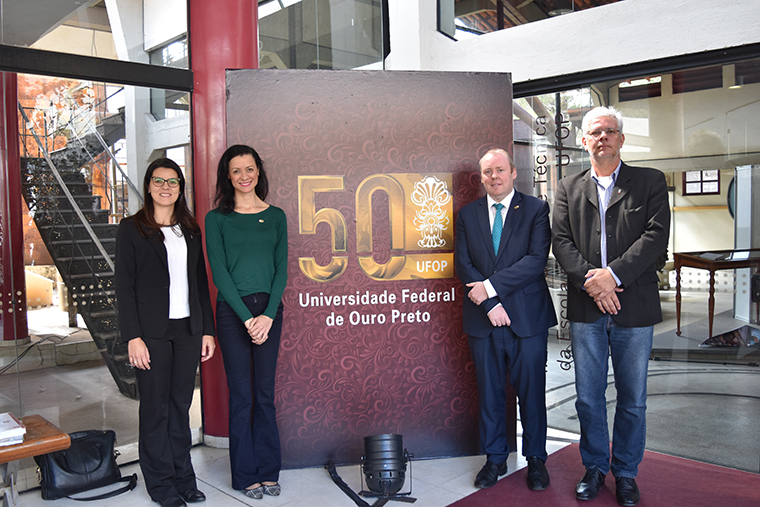 Ouro Preto Tourism Festival took place between the 7th and 10th of August, The international scope event aimed to foster tourism business and economic development throughout the state of Minas Gerais - especially in the Gold Circuit, Inconfidentes and Middle Piracicaba Regions -, and also to promote discussions, information exchange and the dissemination of tourism development among governments, companies, third sector and investors.

CAINT carried out, in partnership with the Festival, two important actions to spread and promote internationalization at the event and in the city: The Case Ireland and the Kitchen Show.

On August 9th, Vice Rector of UFOP, Professor Hermínio Arias Nalini Júnior, received a visit from Mr. Barry Tumelty, Consul General of the Consulate General of Ireland in São Paulo, and the Consulate Commercial Adviser, Fabiana Lino. The visit was accompanied by UFOP’s International Affairs Coordinator, Jaqueline Schultz. At the opportunity, they discussed different aspects of UFOP and Ouro Preto region, as well as possible opportunities for cooperation and financing between Brazil and Ireland and partnerships between UFOP and European institutions. The Consul also attended the opening table of the State Entrepreneurial Women Forum (FEME) and gave the lecture "Case: Experience from Ireland to get out of the economic crisis".

For Jaqueline Schultz, participating in Ouro Preto Tourism Festival was a way to bring the University even closer to the region in which it operates. "Bringing in international experiences contributed to the discussions at the event and was an excellent opportunity to share cultures and learning," she said.