On May 18, in a virtual ceremony, the Rector of UFOP, Prof. Cláudia Aparecida Marliére de Lima, signed the Cooperation Agreement between the Universidade Federal de Ouro Preto and 河北地质大学 - Hebei Geo University (HGU), the first agreement between UFOP and China.

The agreement envisions the mobility of students, professors, and administrative staff from both institutions, as well as, the joint development of teaching, research, and extension activities. The initial actions include offering Portuguese language and Brazilian culture courses, Chinese language and culture courses, also, the development of a proposal for a double degree program between UFOP's Information Systems undergraduate program and the Information and Computer Science undergraduate program at Hebei Geo University.

In her speech, the Rector Cláudia Marliére made a brief introduction of UFOP and highlighted the importance of dialogue, knowledge, and international cooperation to overcome global challenges. The Rector also stressed that the Agreement with Hebei Geo University is a big step in UFOP's history and expressed her gratitude to the Rector and to the other members of HGU for joining UFOP in the mission of bringing high-quality education and research, and social development to Brazil and the world. "We strongly believe that partnerships are essential for building knowledge that impacts society," emphasized the Rector.

Prof. Wang Fengming, the Rector of Hebei Geo University, introduced the institution and expressed his satisfaction in signing the agreement with UFOP, highlighting the importance of expanding the University's partnerships with Brazil: "Although China and Brazil are far apart geographically, I believe that while our cooperation advances and develops, our friendship, and also the friendship between the people from China and Brazil, will become increasingly deeper”. The Rector pointed out that the cooperation between Hebei Geo University and UFOP will foster the development of both institutions and will be a considerable contribution to society.

The Rectors Prof. Cláudia Marliére and Prof. Wang Fengming also mentioned the support given by Professor Qiao Jianzhen, Chinese Director of the Confucius Classroom at Universidade Federal Fluminense and Professor at Hebei Normal University, who was responsible for the first contacts between UFOP and HGU. The Professor visited UFOP in 2018 and participated in the Seminar "Chinese immigration in Brazil and the influence on Minas Gerais' culture" which took place in 2020.

The ceremony was attended by the following UFOP's representatives, besides the Rector Cláudia Aparecida Marliére de Lima: the Vice-Rector, Hermínio Arias Nalini Júnior; the Dean of Undergraduate Studies, Tânia Garbin; the Head of the International Affairs Office, Jaqueline Pinheiro Schultz; the International Affairs Office member responsible for Agreements and Academic Mobilities, Anderson Gamarano; the Vice-Director of the Institute of Humanities and Social Sciences, Helena Miranda Mollo; the Head of the Department of Languages, Rita Cristina Lima Lages; the Coordinator of the Portuguese as a Foreign Language Program, Anelise Fonseca Dutra; the Director of the Institute of Exact and Applied Sciences, Thiago Augusto de Oliveira Silva; the Head of the Department of Computing and Systems Department, Rafael Frederico Alexandre, and the Coordinator of the Information Systems Program, George Henrique Godim da Fonseca. 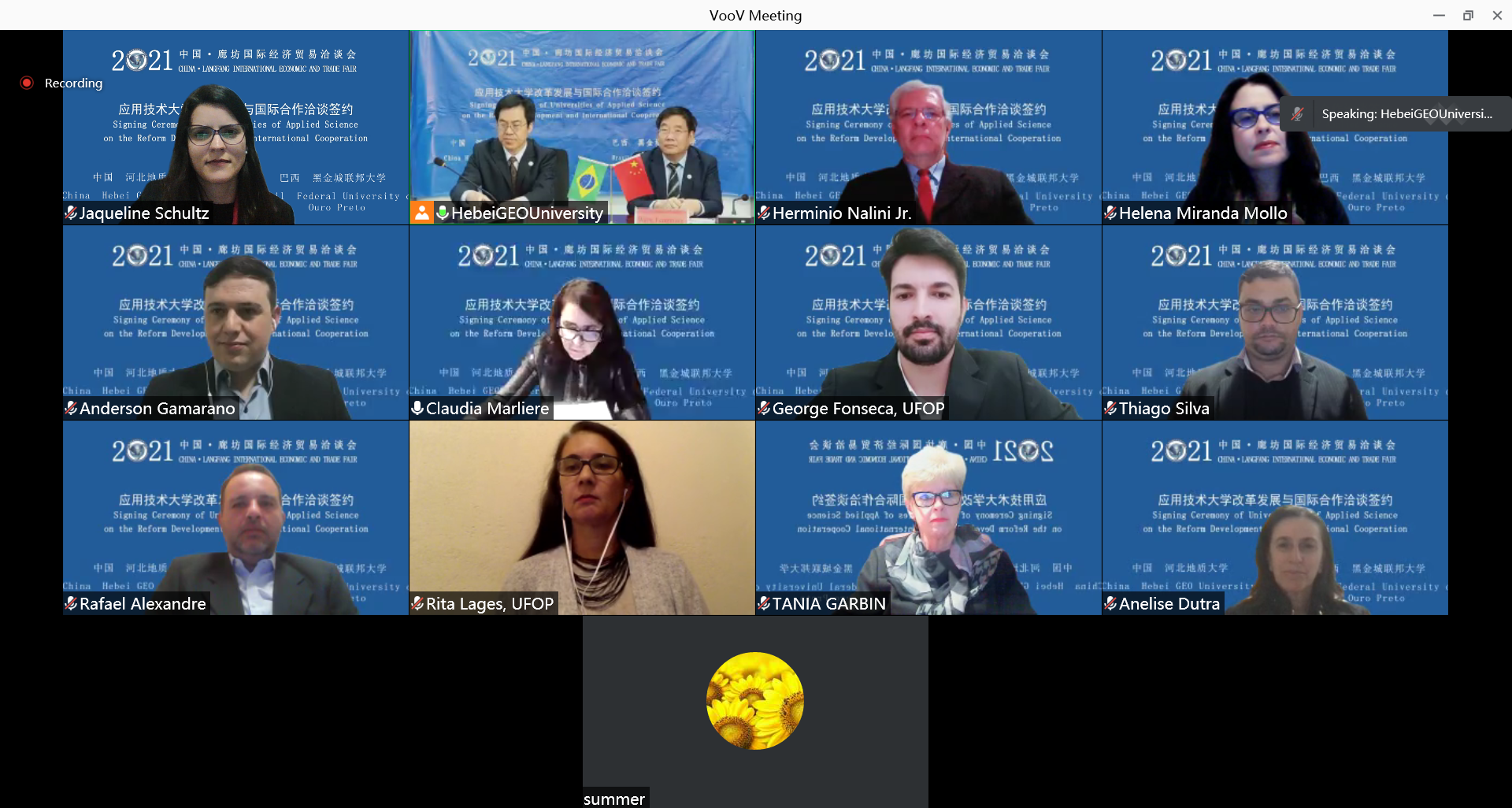 For Jaqueline Schultz, Head of the International Affairs Office, "signing this agreement expands the possibilities for UFOP to work with one of Brazil's most strategic partners, which is China. She highlights that the Agreement with Hebei Geo University is a milestone in UFOP's international cooperation and that "the involvement of the academic community will be essential for the actions to become concrete and expand to more areas of the University”.

The signing ceremony of the Cooperation Agreement between UFOP and HGU was part of the "Conference on the Reform Development and International Cooperation Promotion of Universities of Applied Science" organized by the Ministry of Commerce of China and the Hebei Province Government.

河北地质大学 - Hebei Geo University (HGU) was founded in 1953 and is attached to the Ministry of Natural Resources of China and the Hebei Provincial Government. It is located in Shijiazhuang, the capital of Hebei Province, North China. The institution has approximately 18,000 students, 16 academic units, 64 undergraduate programs, 22 master's programs, as well as Research Centers and Museums in areas such as Engineering, Geosciences, and Management.