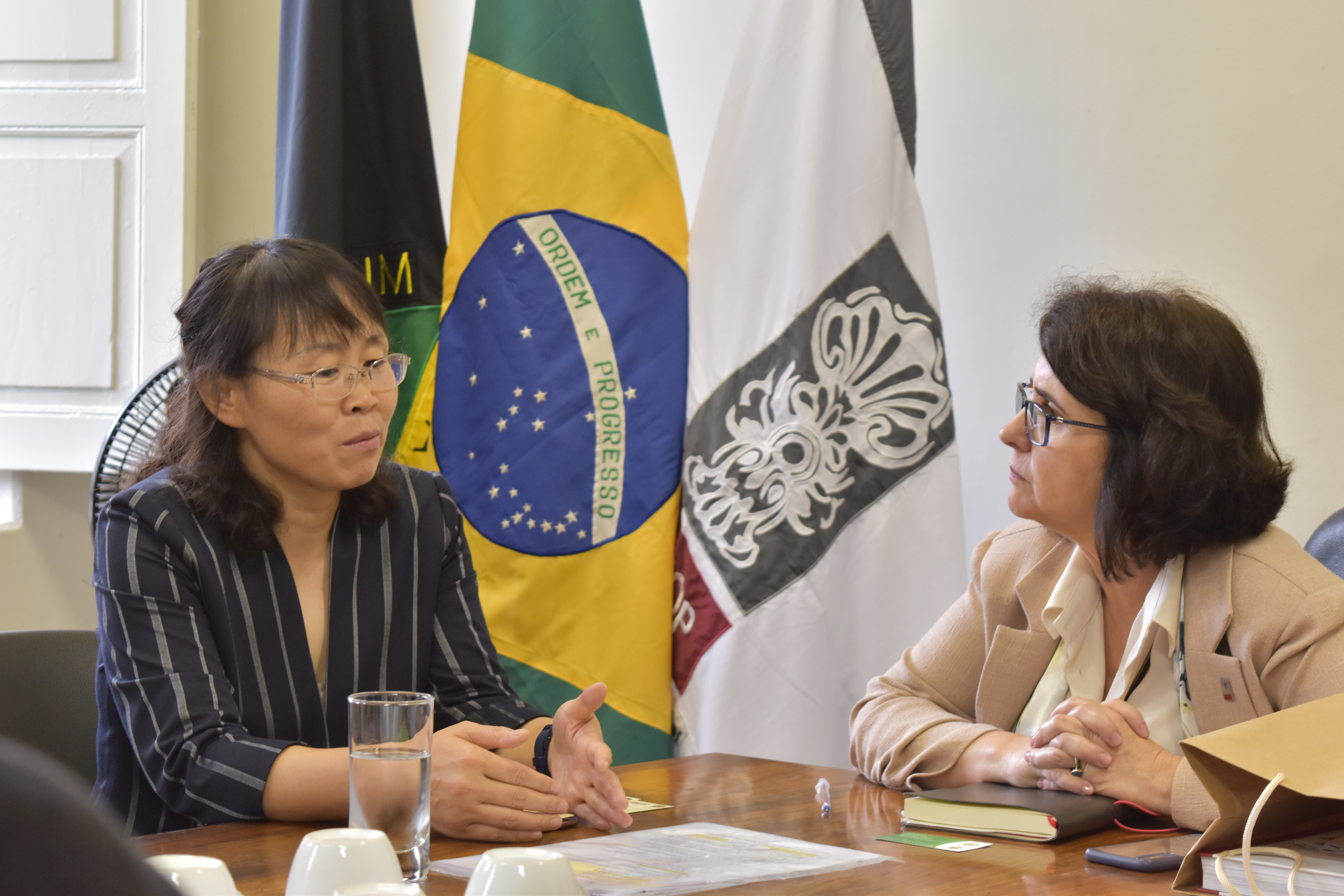 On November 19th, the Rector of UFOP, Professor Cláudia Marliére, received Professor Qiao Jianzhen, Director of the PUC-Rio Confucius Institute for a meeting about cooperation with China. Professor Qiao was responsible for mediating the contact with Hebei Geo University, a Chinese institution that showed interest in establishing partnerships with UFOP, with Geology as the initial focus.

The first meeting between representatives of the two institutions took place in July, in Beijing, during the participation of UFOP International Affairs Coordinator, Jaqueline Pinheiro Schultz, at the Seminar of Chinese Language and Culture for Brazilians, promoted and financed by the Ministry of Commerce of China.

Professor Qiao Jianzhen presented the Confucius Institute and its activities, in addition to the agreement proposal and the requirements for the establishment of an Institute. In addition, the professor mentioned the possibility of sending a Chinese teacher to UFOP on the second semester of 2019.

The partnership has a great relevance for the University, as Rector Claudia Marliére points out: "We at the Rectory state the great interest UFOP has in the cultural exchange and knowledge between both countries, as well as the search for greater integration through research". Also present at the meeting were Vice-Rector Hermínio Nalini Arias Jr., Pro-Rector of Research and Post-Graduation, Professor Sérgio Aquino, Vice-Director of the School of Mines, Prof. Hernani Mota de Lima, and the Head of Department of Geology, Professor Marco Fonseca.

In the afternoon of November 19th, Professor Qiao Jianzhen attended a roundtable that took place at the School of Law, Tourism and Museology. The professor presented general aspects about China and the activities carried out by the Confucius Institute, as well as how to obtain scholarships and to conduct research in China.

Prof. Luiz Albuquerque, who teaches International Law at UFOP, also participated in the event, presenting an overview of the influence of China in the world, as well as the research project "South-South Cooperation with Chinese characteristics: Analysis of the new Chinese regime of international cooperation in Minas Gerais, Brazil, Latin America and the Caribbean".

The event was attended by representatives of various academic units. At the opportunity, the volunteer professor of the PUC-Rio Confucius Institute, Chu Aixuan, performed a traditional song with a Chinese flute and the photographer Eduardo Tropia, born in Ouro Preto, exhibited some of his works on Chinese influence in the Barroco in Minas Gerais.

About the Confucius Institute

The Confucius Institute is a public educational organization under the Ministry of Education of the People's Republic of China whose purpose is to promote and disseminate the Chinese language and culture as well as to facilitate cultural exchanges. The name of the Institute is named in honor of the noted Chinese thinker, Confucius. More information at: http://www.confucius.puc-rio.br.

About the Seminar of Chinese Culture and Language for Brazilians

The Seminar of Chinese Culture and Language for Brazilians is an initiative sponsored by the Ministry of Commerce of the People's Republic of China, aiming to strengthen the country's relations with Brazil. In 2018, the Seminar took place between June 13th and July 12th was attended by 40 people from states such as Minas Gerais, Rio de Janeiro, São Paulo, Mato Grosso, Rio Grande do Sul, Santa Catarina and also from the Federal District.

In addition to the seminar program, the Coordinator of UFOP’s International Affairs Office visited the University of Beijing (School of International Studies, Yenching Academy of Chinese Studies and South-South Cooperation and Development Institute) and Tsinghua University. In Beijing, Jaqueline received the representatives of Hebei Geo University, Professor Liao Yibin, Director of International Relations, and Professor Yue He, Department of Geology).

According to the Coordinator, the experience in China was an excellent opportunity to get to know the country, increasing the understanding about Chinese culture, which will allow a greater approximation at the academic level. Due to the meetings it was possible to introduce UFOP to potential partners and initiate contacts for future partnerships. "China has an incredible culture and people and it was an honor to get to know the country's greatness so close. Brazil and China still need to know each other, and the two countries, with all their peculiarities, can contribute a lot to each other, not only in relation to the economy, but also with education, research and technology".